We are living in the Climate Change Age. Do you know what happens when the Raw Sewage Overflow Yellowish Water Dries As Shown Below?

Scientists are overlooking the fact of climate change could be due to the global pandemic.

Is This Nature's Way Of Controlling Human Population Growth?

In general almost all manufactured products such as electronic, electrical, motor cars etc are not made to last in order to make more sales.

All manufactured products should have at least twenty year guarantee.

All, mining industries should be banned as they are continuously digging out all the materials that makes the planet earth.

The aftermath of the Climate Change extreme rainfall, sewage overflow floods as the water dries it terns to airborne contaminated dust which falls everywhere including inside cups while hanging facing sideways.

These are the facts and NOT scaremongering. The images below speaks for itself.

The aftermath sewage overflow flooded road due to climate change are putting a growing number health at risk.

Protection against the aftermath of the climate change heavy rainfall, sewage overflow flood water dried dust diseases by hanging your cups and mugs facing upside down.

No one can stop Climate Change age without controlling the world population growth. However, people have to find new ways to avoid serious illnesses of the climate change.

More deadly viruses could come to planet earth during next ten years.

You can avoid drinking climate change raw sewage microscopic mites daily by hanging your cups and mugs facing upside down or else more new diseases will catch up with you.

Due to climate change heavy rainfall floods and sewage burst pipes more and more of these microscopic dust mites will breed and fall everywhere including in side cups and mugs.

Don't Store Your Teacups Like These Images In Your Cupboards As It Will Collect Health Hazards Microscopic Dust Mites.

I hope this page will broaden one's knowledge of understanding the possible cause of the COVID-19.

No one knows exactly where Coronavirus originated. Here is another theory.

The Ozone is a layer of gas around Earth's atmosphere to protect all life on earth.

During the recent decades, increasing amount of space rockets have been puncturing the Earth's ozone layer which may let in microscopic particles containing new viruses from outer space.

It's also unhealthy to store teacups in your cupboards as it will collect health hazards dust mites.

This climate change health warning doesn't concern you if you are already using the Elvins Anti Dust Cup Hangers.

The aftermath of the climate change heavy rainfall, sewage burst pipe floods will create contaminated dried dusts which falls everywhere including inside cups while hanging on common hooks.

How To Hang Cups To Avoid Drinking Dust Mites

Since 2014 we have been saying not to hang your cups & mugs facing sideways. Avoid drinking dangerous dusts and live longer without serious illness. Upgrade your old cup hooks with Elvins range Anti Dust Cup Hooks and hangers.

See below for a range of Elvins Anti Dust Cup Hook and products which will help you live longer without serious illness.

This would only get worse unless solutions were found soon. 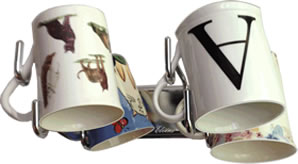